Bring your family and friends to the 19th annual Ukrainian Festival of the Washington, DC Metropolitan Area, on the grounds of St. Andrew Ukrainian Orthodox Cathedral, 15100 New Hampshire Ave, Silver Spring, MD 20905. Friday (dinner only) 5 - 8 pm, Saturday 11 - 9 pm, and Sunday 11 - dusk. $20.00 adult admission. Pay for one day - next day free. Under 21 - free admission. Seniors $10. A portion of the proceeds is for humanitarian aid to Ukraine. NEW this year: Saturday evening concert with Vasyl Popadiuk and stars from Ukraine - Oksana Bilozir and Ruslana.

This is it!!!
Ukrainian Dancing
Let our guests be our ambassadors...
Thank You!

Thank you for making our 18th Washington Ukrainian Festival one of our best. We welcomed over 12,000 people, we offered the best entertainment, food, drinks, activities for children and about 30 vendors. Here are few pictures and more to come.

More pictures you can find on our facebook page:

The Washington Ukrainian Festival was established in 2002 at the initiative of St. Andrew Ukrainian Orthodox Cathedral. The festival became a riveting success from its very beginning, with throngs of visitors enjoying unusual foods, arts and crafts, and entertainment on the inviting Cathedral grounds. In a setting of more than six acres and a pastoral pond under the shade of the golden domes of the beautiful Cathedral, visitors to the festival are immersed in the beautiful and authentic Ukrainian mosaic. From the Cathedral to the Cultural Center to the grounds and the permanent outdoor stage featuring Ukrainian entertainment, to the food tents and vendors’ village, to the Kozak beer garden and grill, to unforgettable Ukrainian tortes and sweets, to the Ukrainian deli and an abundance of children’s treats and activities, the Washington Ukrainian Festival is so unique that it rightly attracts many thousands of visitors every year.

The festival is such an unusual, joyous event that the second weekend in September is now permanently calendared by visitors far and wide as a special day of Ukrainian celebration at the perimeter of our nation’s capital. 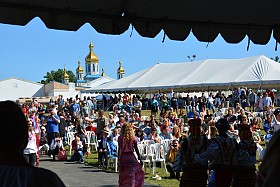 Andrew shot some great pics. Check them out!